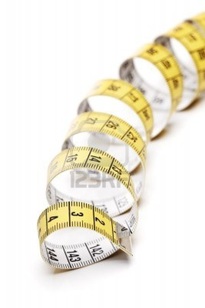 It can get very, very confusing using the English system of measurements. How much more confusing would it be if you were asked how many ounces of oil does it take to fill a 35 gallon drum (That’s a barrel by the way!)?

The metric system is designed to make the math much easier. As an example, the meter is determined to be a certain length, about the height of a doorknob. From the meter you can get all other units of length just by dividing or multiplying by factors of ten.

One meter is 10 decimeters. It is 100 centimeters. It’s 1000 millimeters. It is 0.1 Dekame­ters, 0.01 Hectometers, and 0.001 Kilometers. There are also micrometers, nanometers, millimi­crometers, Megameters, Gigameters. Each prefix is a factor of ten from the base unit of length, the meter.

The metric prefixes are: 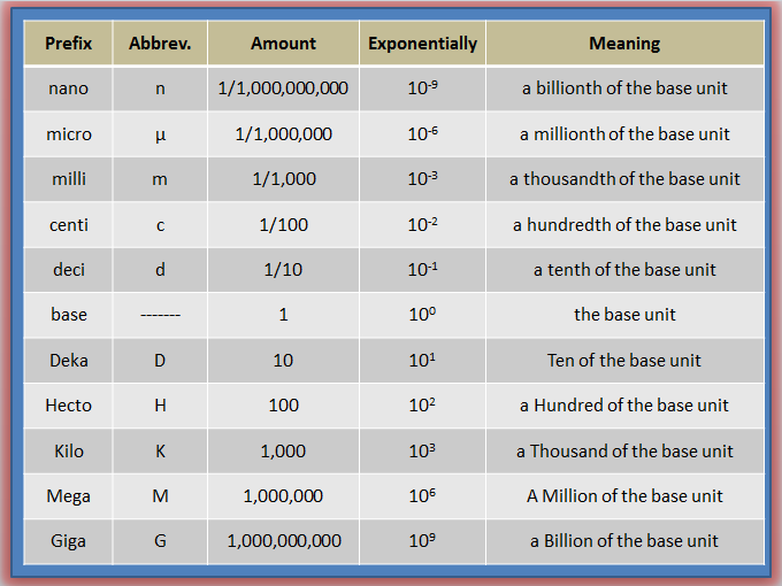 This means that a centimeter is 100 times smaller than a meter. A Megameal is one million times bigger than a regular meal!

Another aspect of the metric system that makes it easier and more reliable than the English System is that many other properties are determined originally from the meter. The meter is the dis­tance that light travels in 1/300,000,000th of a second. If that length is broken into 10 pieces, each of those is 1 decimeter (dm) long. A box that is 1 dm X1 dm X 1dm is one liter (L) - the base unit of volume. If you fill that liter with water, its mass is one Kilogram (Kg). The base unit of mass is one thousand times smaller than the kilogram- the gram (g).

The common quantities and their metric base units are given as follows: 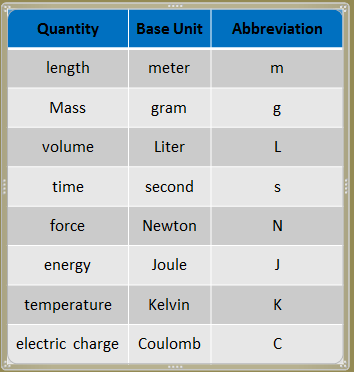 As we go through the year we will be talking about each of these quantities in much more detail.

Watch this video to learn more about the Powers of Ten
(It the video doesn't appear automatically, click HERE)

Click HERE to learn more about the Scale of the Universe.

1.3 Review Questions
Back to Top
Powered by