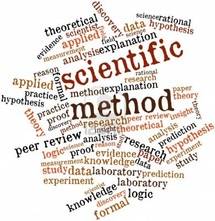 Many science books describe the Scientific Method, formalized by people like Galileo and Francis Bacon. What exactly is the scientific method? To understand what it means, we must first examine the history of science. 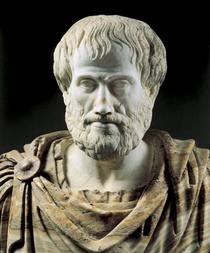 Aristotle (384 BC – 322 BC)
The ancient Greeks that studied science were philosophers. One person in particular was Aristotle (384-322 BC). Aristotle was a student of Plato’s and the tutor of Alexander the Great. He and other philosophers like him tried to see a pattern in everything they studied.

One observation that Aristotle made was that the heavier the object, the faster it would fall towards Earth. This makes perfect sense. If you drop a piece of paper and a book at the same time from the same height, the book hits the ground first. Aristotle would say that there is more earthly material in the book and its natural state is at rest, as close to the earth as possible. So, naturally the thing with more “earth” in it would get to the ground first. Is that the reason or is something more complex happening?  Aristotle observed the world around him and tried to fit everything into patterns. That is what science is all about!

The difference between science today and the philosophy of Aristotle’s time is that we test the patterns to see if they fit under all circumstances. 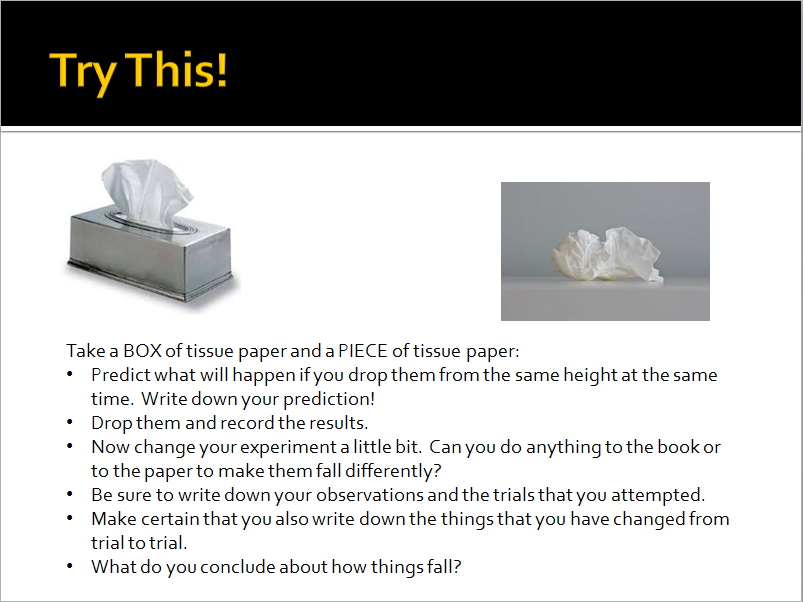 Watch this experiment done on the Moon!

(If the YouTube video does not appear below, click this link:  http://www.youtube.com/watch?v=5C5_dOEyAfk )
What you just did was something that was very different from Aristotle’s meth­ods. What you did differently is that you tested those patterns to see if they held up under all circumstances. Since you could change the rate at which the paper fell, you know that falling is more than just being attracted to the earth. There are other variables involved. You were using the scientific method. What that means is that you tested your predictions to see if they were wrong. As a matter of fact, that is what every scientist is trying to do when she performs an experiment. If an experiment shows a prediction (hypothesis) to be wrong, then the scientist needs to form a new hypothesis. 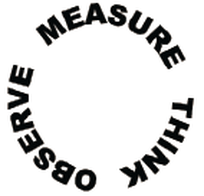 The scientific method is nothing more than testing and retesting ideas in a systematic way. It can be thought of as a cycle of observing-measuring-thinking, then back to observing.
This brings you back to observe and measure, which will lead you to think which sends you to observe then measure then think then observe then measure then think then... The process never really ends!


After you are satisfied with your results and your hypothesis as to how things fall, you must let other people test your ideas.  If they replicate your results, your hypothesis can be considered valid. If they can’t repeat what you saw, you all have to go back to the beginning. 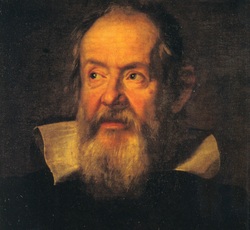 Galileo Galilei (b: 1564, d: 1642)
One of the first things Galileo became famous for was discovering that everything falls at the same rate. As long as air resistance is minimal, everything near the surface of the earth accelerates at a rate of 9.8 meters per second per second (m/s/s). This means that the speed changes by 9.8 m/s every second, no matter the object’s size or weight!

Galileo would write letters to other scientists describing how he performed his experiments and what he concluded from them. He wrote lab reports (and you will too)!

A lab report is designed to let other scientists view your work and try to rep­licate your results. This means that everyone has to be on the same page. If your experiment calls for a length of 1.20 meters then other scientists should be using the exact same amounts. One needs a common, standard system of measurements. In sci­ence we use the metric system.

After many people have tried to prove a hypothesis wrong and have not succeeded, that hypothesis can become either a Theory or a Law. In either case, they are very important ideas.

A working definition of a law is a hypothesis that has been tested vigorously, is believed to be true by all in the community, and is supported by direct evidence. An example of a law is the Law of Gravity. Objects on the surface of the Earth and any­where in the universe follow the same patterns that are described in the Law of Grav­ity. One can measure it, predict what will happen and see that happen.

A working definition of a theory is a hypothesis that has been tested vigorously, is accepted to be true by all in the community, and is supported by indirect evidence. An example of a theory is the Theory of Evolution. Humans and apes evolved from a common ancestor. All the evidence is there for us to see that not only did we evolve with apes but everything on Earth evolved from less complex species. The reason that we cannot call it a Law of Evolution is that we cannot see predictions being satisfied.  The process is too long and slow. There is a great deal of indirect evidence that evolution has occurred throughout time, but the direct proof is impossible to obtain.A theory is just as strong as a law. Both are tested. Both have not been proven wrong. Both theories and laws are accepted by their communities. This means that scientists treat scientific theory as though it were true. It is the best possible explanation. An economist would treat an economic theory as if it were true.

One person cannot have a theory. An individual makes a hypothesis and tests it. Once that hypothesis has been tested by many over a period of time and not proven wrong, it can become a theory or law, depending on the type of evidence. 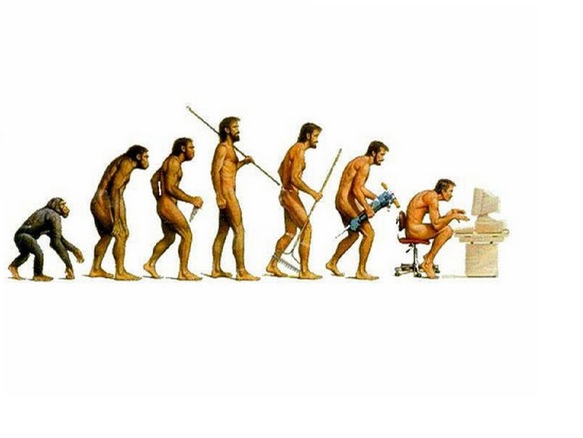 1.1 Review Questions
Back to Top
Powered by