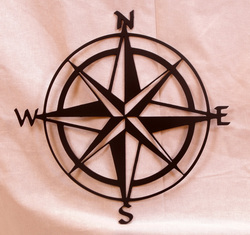 What is the difference between speed and velocity? Basically, velocity is speed in a given direction. A car has a speedometer not a velocitometer because it only tells the driver how fast he is going. If it also gave the direction the driver was going, it could be a velocitometer. In physics, ve­locity is more important than speed because it tells you more about the object’s motion. Always, the more you know, the better.

Again, speed has no direction, velocity does. Speed is the magnitude of the ve­locity. In this class we will use the two terms almost interchangeably. This is because you are learning about linear motion right now. There are only two directions with linear motion- that way and the opposite of that way. It will get more complicated when we discuss planar motion. Objects not only go forward/backward, but also up/ down or right/left.

You can’t go a negative speed, but you can go a negative velocity. From your math class you learned that negative means opposite. So a car that is going at a veloc­ity of 25 m/s is moving differently than a car with a velocity of -25 m/s. If the first car is going East, then the other car is traveling the opposite of East, West.

Click HERE for more practice with Speed and Velocity 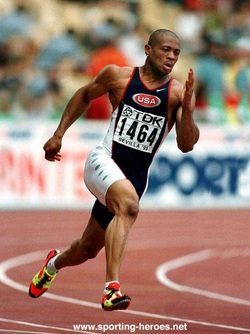 At the beginning of the race, a sprinter in the starting blocks has a speed of zero. When the gun goes off, the objective is to ac­celerate quickly away from the starting blocks and reach maximum speed as soon as possible, and hold that speed for the remainder of the race. A typical runner does not reach top speed until he has trav­eled 15 to 20 meters. By comparison, the cheetah reaches its top speed after only two or three steps.

If the typical world-class sprinter has an average speed of ap­proximately 10 m/s over the course of 100 m, the maximum speed must be higher than this value. This is because the instantaneous speed is less than the average speed while the sprinter is accelerating. The graph of Maurice Greene’s record run might look something like this (red line): 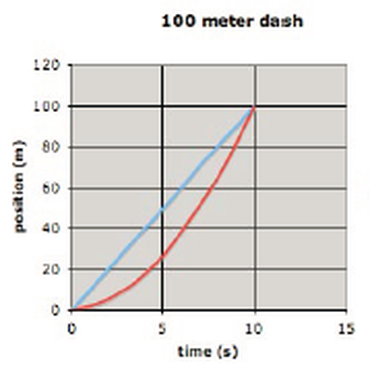 To get his instantaneous speed just pick two points on the graph that are close to­gether. The closer the times are to each other, the closer to an instant of time that you have.