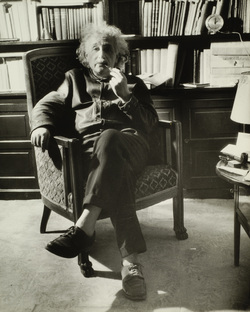 A Force can be defined as a push or a pull exerted on some object. As you read this, you are probably sitting down in a chair. There are at least two forces acting on you as you sit in the chair. One is the force of gravity which is the Earth pulling you straight down. The other is the upward push of the chair you are in which counteracts the pull of gravity.

The two different types of forces are described in the example above. The downward pull of gravity on your body is a type of field force. Field forces can act over a distance and do not involve physical contact between objects. Another example of a field force is magnetic force. The upward push of the chair on your butt is an example of a contact force. Contact forces are very common and result from the physical contact between objects.

When we describe the amount of force acting on an object we will describe a certain number of Newtons. The Newton (N) is the unit for force in the Systemme Internationale. It was, of course, named after Sir Isaac who contributed so much to the study of the motion of objects. (You know you have made it in Physics when they name a unit after you).

How much force is 1 Newton? Appropriately enough, if you hold a medium sized apple in your hand, the force the apple exerts on your hand is approximately 1 Newton! 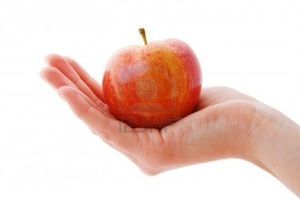 Net Force
If the forces acting on an object are balanced, as they are in the chair example above, the motion of the object will not change. That is, there will be no acceleration. If you are sitting at rest in a chair and the upward push of the chair is equal to the downward pull of gravity, you will stay at rest in the chair.

If, however, someone comes and wrenches the chair out from under you, the downward pull of gravity is no longer balanced by the upward push of the chair. You now have an unbalanced force acting on you and therefore, according to Newton’s First Law, your motion is going to change. You will accelerate downward.

By using diagrams we can identify and analyze the forces acting on an object. This will help us explain and predict how the object’s motion will change. 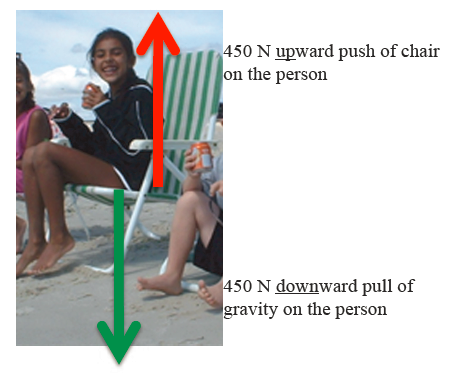 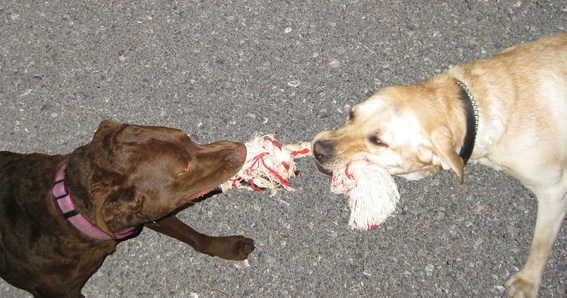 If the tug of war is a "tie", the toy will not accelerate.  The Free Body Diagram (ignoring the very small weight of the toy) would look like this:

If the dog on the left releases the toy, the toy will accelerate to the right.

2.2 Review Questions
Back to Top
Powered by