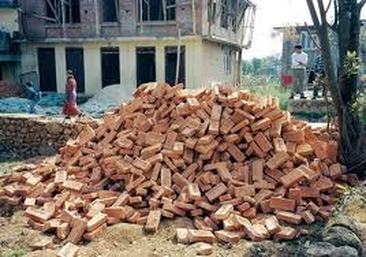 What makes something “powerful”? Many people use the term power when they are trying to describe the work that is done. Just like the term, work, the term power is very specific in physics. It is easy for people to mix them up, but they mean different things. 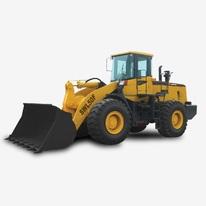 He could go about moving the rocks in a few different ways.

1. He could lift each rock slowly, one by one, onto the truck. That would take him the entire day (8 hours).

2. He could have some friends help lift the rocks. The work would only take an hour this way.

3. He could use a front-end loader and put all the rocks in the truck within a minute.


In each case, the exact same amount of work is being done. Since the rocks all get to the height of 1.5 m, they have the same PE, no matter how they got there. The energy required to do the work comes either from the food the people ate or the fuel that the tractor burned. Again, in each case 14,700 J of energy was given to the rocks.

Power is defined as the rate at which work is done. Just like another rate, it is a comparison. With Power, one compares the work done to the time it took. The units of power would then be the J/s. That is given a new name, the Watt (W).

In the brick-moving example above, here is a breakdown of the Power outputs: 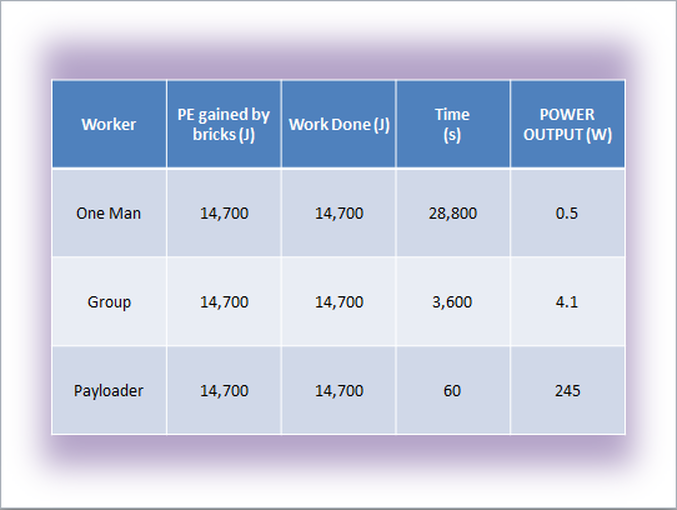 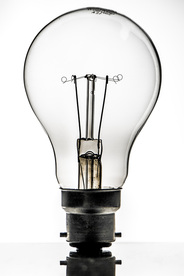 If the unit of power is the Watt, what does a 100 Watt light bulb do?  The power rating on anything that you have, whether it be an engine, a light bulb, a stereo, a washing machine, … tells you the rate at which it uses energy.

A 100 Watt light bulb uses 100 J of electrical energy every second that it is on. Most of that energy does not come out as light though. Most of it is turned into heat to make the bulb’s filament glow.

5.6 Review Problems
Back to Top