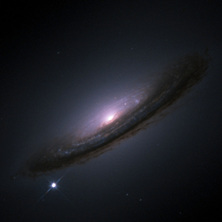 Where are elements made?  What forces are needed to create all 91 naturally-occurring elements?  These are very good questions.  They seem simple enough, but can actually get quite complicated.  Up until about 60 years ago, we could not make new elements.  It took the work of many people (Lise Meitner, Enrico Fermi, and Robert Oppenheimer to name just a few) to create first man-made nuclear fission (splitting big atoms), and then nuclear fusion (joining small atoms).  The atoms that have been made by people are very exotic.  Their lifetimes are measured sometimes only in milliseconds. These man-made elements are very unstable. 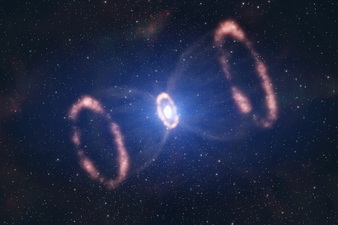 The atoms that make you and all the matter in the universe were not created on Earth, they were created in stars.  When the universe began about 15 billion years ago, first there was only energy in the form of light.  As the universe expanded and cooled, hydrogen and helium formed.  After hundreds of thousands of years these two elements started to collect together because of gravity.  If the “clumps” were massive enough, they would eventually become stars.

The great weight of the collection of hydrogen would make the interior of the star so hot and at such a great pressure that hydrogen atoms could push together and become helium.  This helium “ash” would collect at the center of the star. 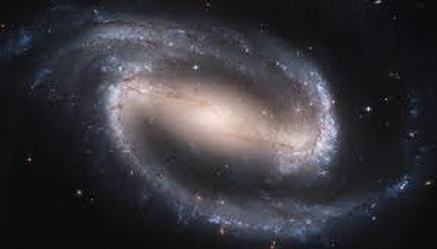 Once enough hydrogen turned into helium the star would contract more, the pressure and temperature would build up even more to the point where the helium could ignite and create lithium, beryllium, boron and carbon - but mostly carbon.

Once enough carbon existed, the star went one of two ways.  If it was a low mass star, the carbon core was its end.  It would just slowly cool. If it had enough mass, the star would contract again, squeezing the carbon enough to turn it into all of the elements up to and including iron.  This means that every element from #7 (Nitrogen) to #26 (Iron) came from a high mass star.  Where did all the elements after iron come from?

These carbon-burning stars are actually gigantic.  Think of them as layered like an onion.  At the center is the Fe, surrounding that is C, outside of the C is He and surrounding the entire star is H.  Each of these layers is pressing in on the center and the center is pushing out, keeping the star stable. 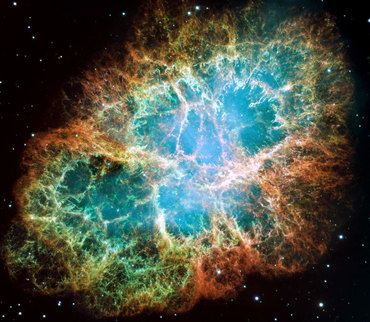 Eventually the carbon will run out and there will be no more outward push. All of a sudden, the star will collapse in on itself due to its own weight.  Once all the elements collapse in, the core gets so incredibly hot that it creates the biggest explosion in the universe.  That is called a supernova. All the elements past iron (gold, silver, uranium, copper, zinc, ...) are created in this explosion.

The pieces of the exploded star go out into space. After a million years or so, they combine into other huge clouds and begin to contract again. Now, the material that is in the cloud is no longer just hydrogen and helium. The cloud contains all the elements required to make planets, moons, comets, and even, people!