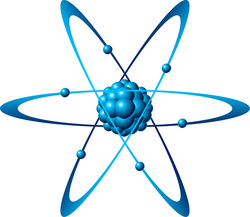 1. Atomic  Size
When we speak of the size of an atom we are referring to its radius, not its mass.  Remember that all of an atom’s appreciable mass is found in the nucleus and that the nucleus is a tiny point compared to the size of the electron orbitals.

Which is bigger, hydrogen or helium?  Most people would quickly say that helium is bigger because its mass is larger.  Hydrogen is actually the larger atom.  Remember that the size of the atom is defined by the radius of the valence shell, not by the mass of the nucleus.

Let’s look more closely at the hydrogen and helium atoms.  Hydrogen is made of one positively charged proton in the nucleus keeping one negatively-charged electron orbiting.  Helium has two protons, two neutrons and two electrons.  The neutrons do not factor into this because they just add mass to the nucleus and the size of the nucleus is not what we are concerned with. 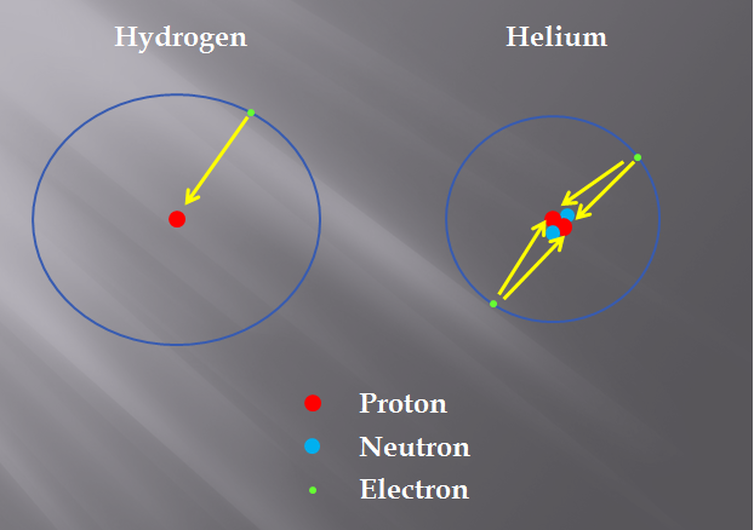 Click or tap for larger image.
The two protons keep the two electrons in orbit around the nucleus.  A common misconception is that one proton’s attractive power is canceled out by one electron.  That is not true.  Each proton pulls on each individual electron.  Since the electrons are being pulled by twice as much “power”, they are a little closer to the nucleus.  Helium pulls that electron orbital closer to the nucleus than Hydrogen can.  This means that in the same period, it is actually the element with the least number of protons that is the largest.

Does this pattern hold true as you read the periodic table down a family?  NO!  The protons do attract the electrons, but electrons repel each other.  If an energy level is full, the repulsive force from the electrons will make the next one occupy a stable energy level further away.  As you read down the table, the atomic size increases. This is because the atoms are gaining energy levels as you go down the table.  That makes Francium, with one electron in the 7th energy level, the LARGEST atom on the Periodic Table. 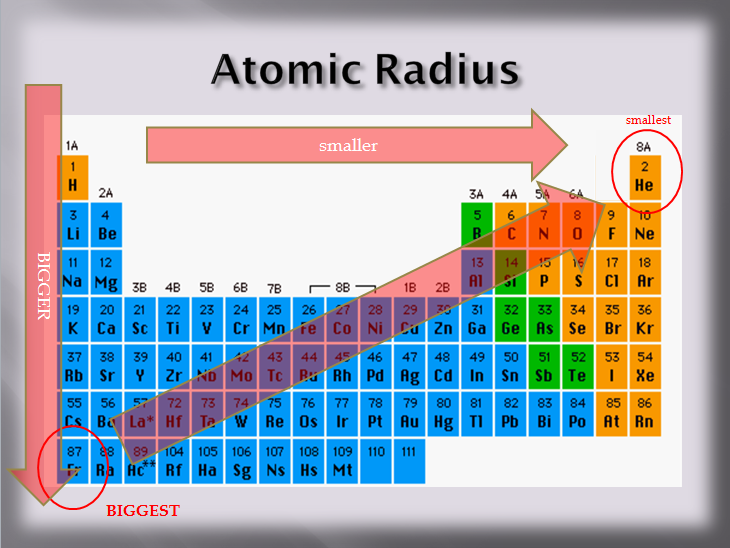 2.  Ionization energy
Ionization energy is the energy that is required to take an electron away from an atom.  An analogy might be if someone wanted to take a pencil away from someone else.  To get the pencil, the taker would have to expend some energy.  The amount of energy needed (how hard he has to work) is dependent upon how strong a grip the holder has on the pencil.  If the holder has a loose grip, the taker doesn’t need to expend much energy. If the holder has a tight grip, the taker would have to have a great deal of energy to get the pencil.

Another way to view it is to picture a bunch of magnets "orbiting" a steel ball.  A magnet that is closer to the steel ball will be attracted to the ball more strongly and therefore be more difficult to pull away. 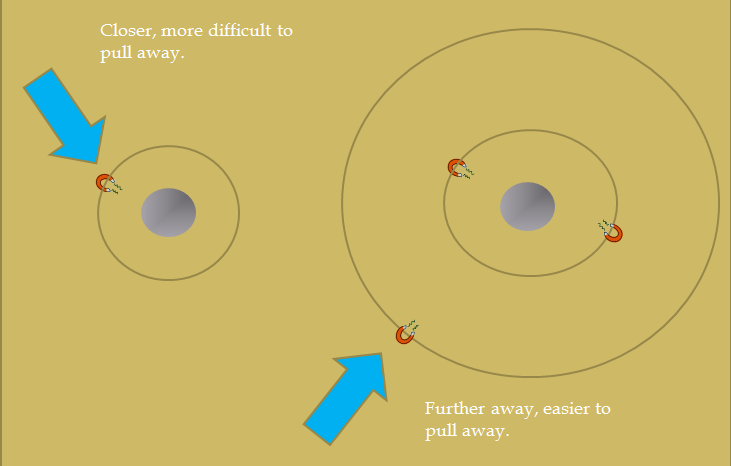 One can picture ionization energy as a passive thing.  It is how much energy something else needs to have to take the electron away from the atom.  It deals with how atoms hold onto their own electrons, not how they take electrons themselves. 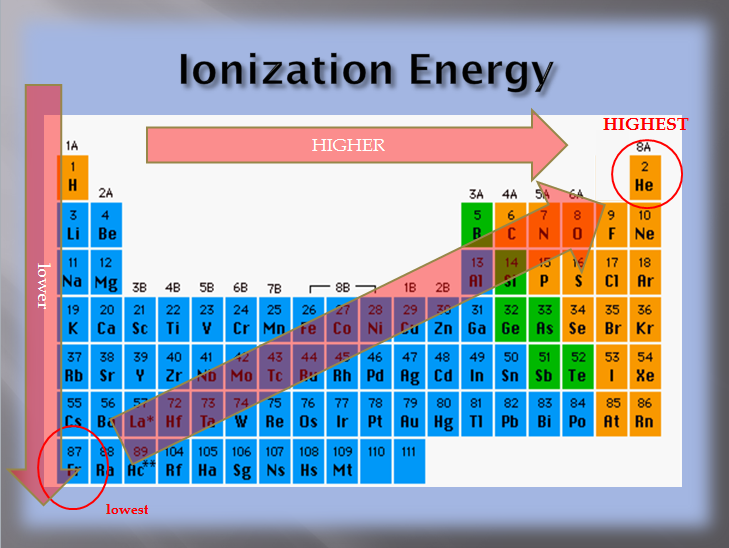 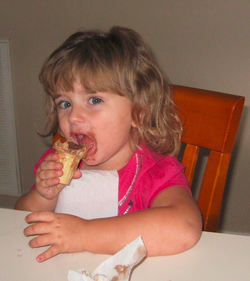 Does this mean that helium, being the smallest, would have the greatest electron affinity? NO! Remember that helium is a noble gas and noble gases have full valence shells.  They do not become more stable if they gain any electrons.  The atom with the greatest electron affinity would be a small atom, but also one that takes electrons.  That is Fluorine. Its valence shell is close to the nucleus and it only needs one more electron to be full. 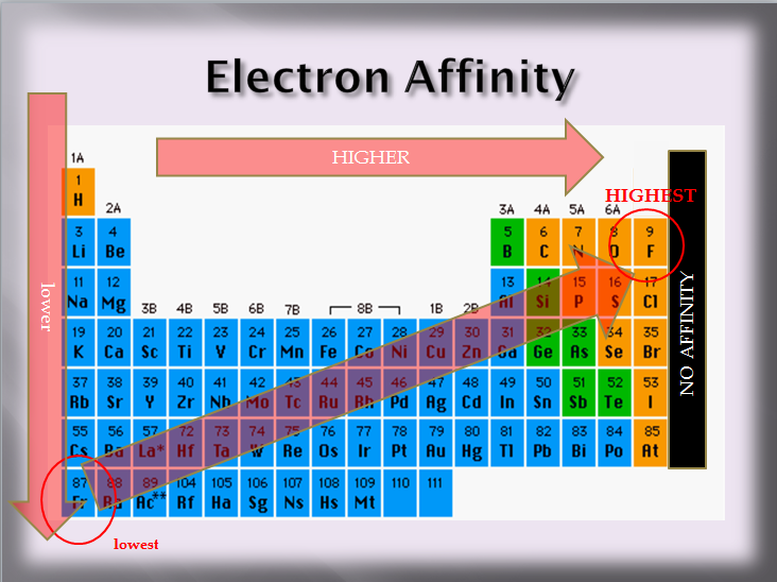 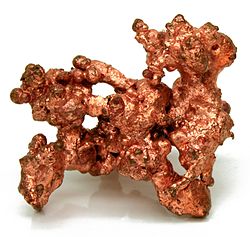 4.  Metals and nonmetals
What is a metal?  Take a look at some materials that you know are metals.  Look at some iron nails, a lead pipe, a copper pipe, some silver wire.  What properties are common among these things?

First off, they are all relatively soft.  It is easy to bend most metals.  It is easy to pound most metals into thin sheets.  That is called malleability.  Most metal are ductile-they can be drawn into wires.  Metals are good conductors of heat and electricity.  That last statement gives the best clue as to how to truly define a metal.  What must an atom be like if the element can conduct electricity?  Should it have a strong or a weak hold on its valence electrons?  If an atom needed to gain electrons to be more stable, what would happen when one put a current (flow of electrons) into it?  Would the atom take the extra electrons or would it allow the electrons to flow?

Since the atom becomes more stable when it gains electrons, the flow would stop there.  The electricity would not be conducted.  Atoms that easily lose electrons to become more stable will be the best at allowing electricity to flow.  They will not take the extra electrons from the current.

Looking at the periodic table, what families of elements lose electrons to become more stable?  It’s any family that has a positive valence number!  The alkali metals, the alkaline earths, the boron family, and the transition metals are all metals. 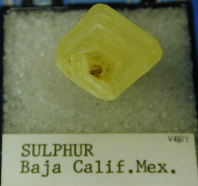 If the elements that give away electrons are considered metals, then the ones that take electrons would be the non-metals.  Any family with a negative valence number - the nitrogen family, the oxygen family and the halogens are all non-metals.  Their properties are the opposite of metals. Where a solid metal is soft, a non-metal would be hard.  Where a metal is malleable, a nonmetal is brittle.

What about the members of the carbon family?  Their valence number is 4±.  That means they can just as easily give as take electrons.  They are called metalloids or semi-metals.  They have properties of both metals and nonmetals. 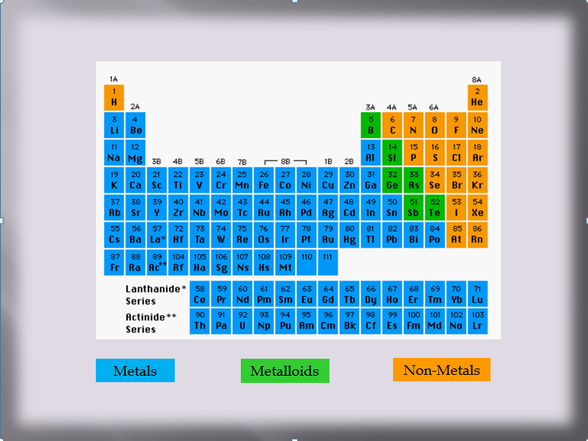 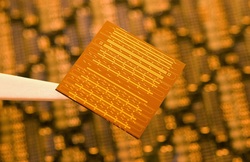 Of course, things can’t be that easy.  Because the electron configurations get more and more complicated as more electrons are added, the line between metal and nonmetal is not straight by the families.  Near the carbon family, you will see a staircase written on some periodic tables.  Elements to the left of the staircase are considered metals,  those to the right are considered nonmetals.  Those that touch the staircase are the metalloids.

As you read across the periodic table, metallic and nonmetallic properties become more obvious.  The further left you are on the table, the more metallic the elements.  The further right you are on the table, the more nonmetallic the elements.  What about up and down?  The most metallic family is the alkali metals.  These elements most easily give up their one valence electron. Which would give up its electron easier, lithium or francium? 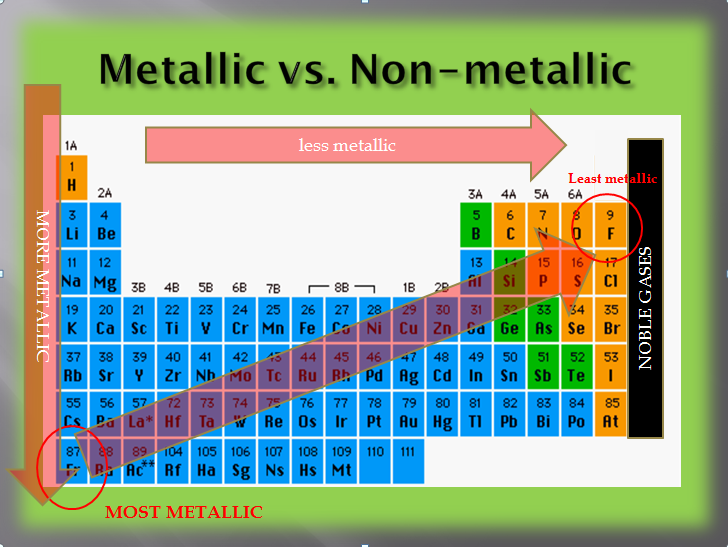 Remember that the periodic table is that weird shape because it is designed to make patterns and recurring properties more obvious at a glance. When comparing properties of different atoms, the key to reading the table is to think about the extremes.

The atom that is largest, has the lowest ionization energy, and the smallest electron affinity is Francium.  If you are comparing two elements for any of these properties, whichever one is physically closer to francium on the periodic table is the one that is more similar to Francium and its properties. Helium is the smallest and has the highest ionization energy.  Therefore, whichever element is physically closer to helium on the table has more of those properties.  The same is true with location relative to fluorine and higher electron affinity.