We have been discussing how atoms will trade and share electrons to become more stable.  What determines if an electron will be shared between atoms or if the electron is taken completely away?

Let’s look at three examples of molecules that have different types of sharing on the valence shell.
These three examples show three ways that electrons can be held within bonds.  These types of bonds have specific names and they indicate properties about the molecule.

electrons shared equally:         nonpolar covalent bond          (CH4)
It would be very cumbersome to have to draw a LDS for each molecule to determine the types of bonds that it has.  The bonds are determined by the relative strengths of the atoms to take extra electrons.  A chemist by the name of Linus Pauling called this property, electronegativity.

Pauling is the only person ever to receive two unshared Nobel Prizes - for Chemistry (1954) and for Peace (1962).  The Prize in Chemistry was for his insight and work on molecular bonding.  His Peace Prize was for his very active work against atmospheric nuclear testing and the excessive buildup of nuclear arsenals.  He also discovered the structure of vitamin C and was a strong proponent of taking vitamin C daily for good health.  Since he lived until the age of 93, he probably had something there! 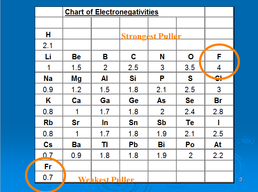 Click or tap for larger image.
Of most importance to this class is the “Pauling Chart of Electronegativities”.  It is a relative scale (0= weakest, 4= strongest) of the strengths of atoms to hold an extra electron. Another way to describe electronegativity is the “pulling power” of an atom. A partial chart is given here:

Using this chart, one can determine the type of bond that exists between two atoms.  The greater their difference in electronegativity, the closer the bond is to ionic.  Think of this as a tug-o-war where you know the strengths of the contestants.  There is a mathematical way of looking at the bonds as well.

|Ea - Eb| is the difference of electronegativities between atoms A and B. The absolute value sign is there because you are just looking at the relative strength, the direction is always towards the nonmetal.