8.1 - The Periodic Table of the Elements

Click or tap for larger image.
You deal with periodic tables every day.  A calendar is a great example of a periodic table.  Once you know the rules of how it is set up, you can easily tell what day any particular date is. A calendar has periodicity; certain things (like, weekends) occur at regular intervals.

The Periodic Table of the Elements also has periodicity. Certain physical principals regarding atoms and elements (for example: atomic radius and ionization energy) follow a pattern that is “mapped” by the Periodic Table of the Elements.  This is one of the most useful tools in chemistry. It tells more than just the names of the elements.  The periodic table describes how elements react, why they react, what their general properties are, and many, many more things.  Why is it that the periodic table of the elements is shaped in such an odd way?  Why are some columns higher than others? Why are some of the rows separated? Why are the elements listed by number of protons? 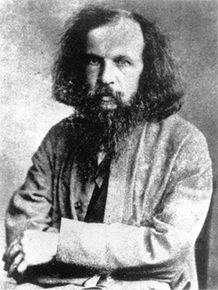 Dmitri Mendeleev was a Russian scientist that is credited with creating the periodic table in 1869.  He put the elements in an order that exhibited their periodicity.  This means that each row and each column groups the elements according to similar properties.  What is so amazing about this is that Mendeleev accomplished this without knowing about protons, electrons, or having a complete list of the elements.  He left open spaces in his table, assuming that the elements that would fit there just hadn’t been discovered yet. 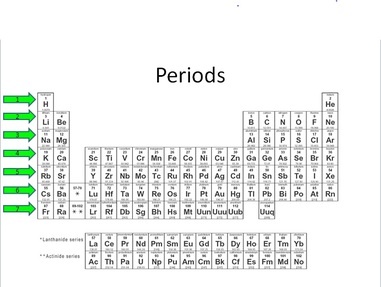 Click or tap for larger image.
The rows across the periodic table are called periods. They can also be referred to as energy levels (remember that term?).  Keep in mind the order of electron configuration in the Bohr Model (2,8,8,18,18,32,32).  The first period has only two elements in it, H and He.  The second and third periods have 8 elements each (Li-Ne and Na-Ar).  The fourth and fifth periods each have 18 elements (K-Kr and Rb-Xe).  The sixth and seventh periods each can have 32 elements in them (Cs-Rn and Fr- ?).  As you add a period to the table you are adding energy levels to the atom.  Hydrogen has only one energy level (1e-). Potassium (K) has four energy levels (2e-,8e-,8e-,1e-). 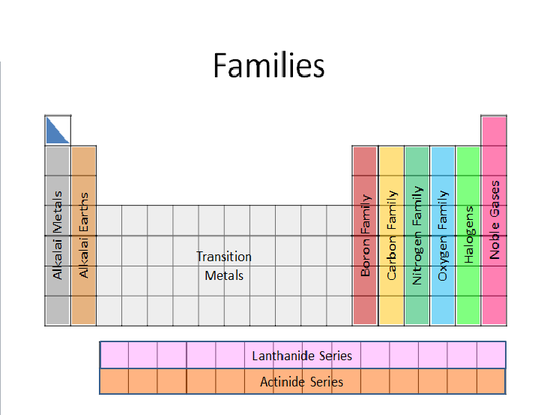 While the periods are listed as 1, 2, 3, etc., many of the families have more specific names.  Members of Group IA (Li-Fr) are called the Alkali Metals. Hydrogen really is not a member of this family - It is in a class by itself.  It has some properties that seem like an alkali, but others that don’t.  The members of Group IIA (Be-Ra) are called the Alkaline Earths.  Groups IIIA, IVA, VA, and VIA are called the Boron Family, the Carbon Family, the Nitrogen Family and the Oxygen Family respectively.  The Group VIIA elements (F-At) are called Halogens.  The word halogen means “salt-former”.  All the elements in this group can be found in nature as salts (combined with alkali metals or alkaline earths) on the earth.  They are too reactive to be found freely in their elemental form.

The last group VIIIA (He-Rn) are called the Noble Gases. Each has a full valence shell.  This means that the noble gases will not lose or gain any electrons to become more stable.  They are already as stable as they could possibly be.  The noble gases do not react with anything. They are inert.

What does it mean when one says that an atom will lose or gain electrons to be stable?  Objects are considered most stable when they are in their lowest possible energy state.  For atoms, this occurs when the valence shell is full.

Normally, since losing one electron requires less energy than gaining seven, sodium, and members of its family will become 1+ ions to be more stable.

Click HERE for a link which takes you to VIDEOS of each element on the Periodic Table!